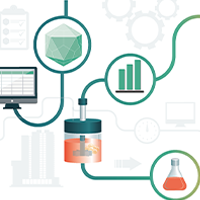 Ankita Desai is a Bioprocess Field Application Specialist at Eppendorf North America. She supports customers with her expertise in cell culture bioprocessing. After her Master’s in Pharmaceutical Sciences at the Northeastern University in Boston, she has gained several experiences working for global players in the pharmaceutical industry.

Philipp Nold studied Biology at the Ruhr-University Bochum, Germany and holds a PhD in the same field from the University of Marburg. In December 2017 Dr Nold joined the Eppendorf Bioprocess Center as an Infield Application Specialist for stem cells. As part of this, he supports colleagues and customers worldwide with his expertise in stem cell bioprocessing and applications2.

In your view, what are the most important challenges in upstream bioprocessing for viral vector production?

Viral vector production processes pose several upstream bioprocessing challenges. In the course of gene therapy development, the material demand changes. A comparatively low number of viral vectors is needed at the research and development stage, but the demand increases with the initiation of clinical trials and goes up further once the therapy gets approval. Production processes need to be scalable to adapt to the changing requirements. To be used in gene therapy applications, viral vector production processes need to be commercially viable. Many factors influence this, including the virus titer, process robustness and cost of goods.

One challenge in viral vector upstream bioprocess development is that many steps of the production process must be optimized, from cell expansion to transfection/infection to virus production. Furthermore, the stability of the virus has to be taken into account. Process parameters like culture pH, temperature, dissolved oxygen concentration and nutrient supply can influence one or more of these steps, sometimes in a less desirable direction. Warnock et al. give an example in a recent review [1]. The temperature during the virus production phase can increase the half-life of the virus as well as affecting productivity. Therefore, bioprocess engineers need to find the ideal compromise to achieve the maximum virus titer and maintain functional viruses. The cell density at the time point of infection and the multiplicity of infection are other important parameters. The multitude of parameters to be considered makes upstream bioprocess development for viral vector production quite complex.

Another challenge is the large number of different viruses and producer cell lines that are currently being used. Among others, adeno-associated viruses, lentiviruses, and adenoviruses are used as viral vectors in gene therapy applications, each with their own advantages and disadvantages. For their production, suspension and adherent cell lines are used, which naturally need different kinds of cultivation systems. There is no one production system that fits all applications, so decisions on virus, cell line and bioprocess systems have to be made on a case-by-case basis.

Many parameters need to be considered in bioprocess development for viral vector production. Do you have a recommendation on how to deal with that complexity?

Developing high-titer viral vector production processes requires optimization of producer cell lines as well as the optimization of culture conditions. When talking about the optimization of bioprocess parameters, there is great benefit to a Design of Experiments (DoE) approach. In a DoE approach, researchers change different process parameters at the same time, according to statistical principles, instead of changing only one factor at a time. Consequently, DoE studies require fewer experiments. Furthermore, they allow for unraveling of interdependencies between parameters, which would be difficult or impossible to spot in traditional experimental approaches. DoE studies are ideally carried out at small scale in parallel bioprocess systems. This saves resources and time, and ensures maximum reproducibility between runs. Specialized software products can help with the various steps of a DoE study – study design, transfer of the parameter combinations to the bioprocess control software and data analysis.

The comparatively short half-life of many viral vectors can severely impair the virus titer. Which strategies promise help?
As indicated above, process temperature is one factor that influences viral vector stability. Instead of optimizing the process temperature, bioprocess engineers can shorten the residence time of the virus in the culture medium to increase its stability. This can be realized in a perfusion bioprocess. Culture medium, including the virus particles, is constantly harvested and fresh medium is added to the bioreactor, while the cells are retained in the bioreactor. There are several advantages: the residence time of the viral vectors in the culture is reduced, while high cell densities can be reached due to the constant supply of nutrients and the removal of toxic by-products. Different cell retention technologies exist. Microcarriers are often used to provide a growth surface for the cultivation of adherent cells in stirred-tank bioreactors. In a perfusion process, the carriers can be retained in the bioreactor by a spin filter. Dependent on the pore size, spin filters can also be used as cell retention devices for suspension cells. A fibrous growth matrix like Fibra-Cel is an alternative to microcarriers that offers a three-dimensional environment in which shear stress is minimal. Fibra-Cel is used as an attachment matrix in packed-bed bioreactors. In these systems, the culture medium circulates through the bed and can be exchanged without the need for cell filtration. Interestingly, packed-bed bioreactors from Eppendorf were used for the production of the first approved gene therapy product in China. Fibra-Cel was used as the growth matrix for the cultivation of adherent HEK293 cells [2].

What are your words of advice in terms of adequately preparing academic vector bioprocesses for translation to the industrial sphere?

The demands on process scalability, process consistency, and regulatory requirements clearly differ in early research and development in academia and in industrial vector production. Often, initial proof-of-concept studies in academia require only a low number of viral vectors and a high standardization of the production process is not yet required. This changes as development goes further. To fulfill the material demand for preclinical studies, clinical trials and finally, commercial treatment, bioprocesses for viral vector production need to be scaled-up. Factors such as cost of goods, yield and process robustness, which are less important if producing viral vectors for small scale experiments, become more important if a high amount of material is required. My advice would be to consider these factors as early as possible in research and bioprocess development. This can avoid the need to invest too much time in protocols which may be suitable in the R&D phase, but may become cost-prohibitive or are not scalable later on. Regulatory requirements are of course another important factor to consider when translating a bioprocess to an industrial setting.

What developments do you expect in viral vector production?

Currently, many different producer cell lines and viral vectors are used in gene therapy applications, and this diversity is expected to remain in the near future. However, in gene therapy development, there is strong pressure to reduce development and manufacturing costs and to decrease time-to-market. Several developments promise to serve these needs. Process scalability is crucial to transfer a process from R&D to the manufacturing stage. Suspension cell lines are more convenient to handle than adherent cells because scale-up of suspension cultures in stirred-tank bioreactors is more firmly established than scale-up of adherent cell cultures. We might see more suspension or suspension-adapted producer cell lines in the future. We might also anticipate a shift towards human cell lines, because of safety concerns on the one hand, and a higher in vivo stability of vectors harboring human glycosylation patterns on the other.

On the equipment side, single-use equipment will gain even more importance, as it reduces turn-around times and lowers the contamination risk.

What is your advice to gene therapy developers and manufacturers in terms of future-proofing both their viral vector bioprocesses and their production requirements through scale-up?

The number of potential patients and the amount of viral vector needed per treatment dose indicate if, and to what extent, production capacity needs to be scaled-up in the future. If production likely needs to be increased in future, it makes sense, in our opinion, to aim for a scalable culture system early on. As mentioned above, scale-up of suspension cell cultures in stirred-tank bioreactors is more firmly established than scale-up of adherent cell cultures. Especially the scale-up capabilities of two-dimensional culture systems are limited because with them, space requirements and manual workload become comparably high when scaling up. Therefore, in our view, suspension cell bioprocesses are more future-proof than processes using adherent cells.

How does Eppendorf support its customers in viral vector process development?

Perfusion processes are well suited to shortening the residence time of viral vectors in the culture medium. Eppendorf application engineers recently demonstrated the suitability of both a packed-bed bioreactor filled with Fibra-Cel disks and a stirred-tank bioreactor equipped with a microcarrier spin filter for the cultivation of adherent cells in perfusion. Using the packed-bed bioreactor, they achieved higher cell densities than when cultivating the cells on microcarriers, without risking fouling of the filter. Microcarrier cultures, however, allow easy recovery of cells. It therefore strongly depends on the particular application as to which perfusion system is better. Eppendorf offers microcarrier spin filters for different vessels, the smallest being the 1 l glass vessel of the BioFlo 120 bench-scale bioprocess controller, and the largest the 32 l stainless-steel vessel of the CelliGen 510 bioprocess controller. Packed-bed bioreactors cover the same working volume range. To support scale-up, our colleagues have determined the impeller power numbers of packed-bed vessels with working volumes of 3.75 l and 32 l, representing an approximately nine-fold scale-up.

Many bioreactors from Eppendorf can be equipped with alternating tangential flow (ATF) filtration devices for cell retention. ATF-based perfusion is a valuable tool for achieving high cell densities before infection or producing high-density cell banks for inoculation. Eppendorf application engineers recently demonstrated the feasibility of using an ATF-2 device from Repligen for perfusion cell cultures with working volumes of 1 l and 3.75 l. Larger ATF filtration devices are also available, which in principle support perfusion cultures with working volumes of more than 1000 l.

In summary, with our comprehensive portfolio of scalable bioreactor systems, software, single-use bioreactors and worldwide service, we strive to support bioprocess engineers in tackling the challenges in upstream bioprocess development for viral vector production.

This work is licensed under a Creative Commons Attribution- NonCommercial – NoDerivatives 4.0 International License.

This article is part of the Upstream Bioprocessing Update spotlight