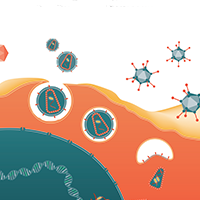 While the majority of gene therapy vectors are derived from viruses, their use introduces the issues of immunogenicity, carcinogenicity, insertional mutagenesis and reversion to replication competency (infectivity). In addition, viral vectors often come with manufacturing bottlenecks such as scalability and processing. In order to avoid the problems associated with viral vectors, investigators turn to the use of naked DNA, usually in the form of non-integrating bacterial plasmids, which have now (as of February 2017) been used in 427 clinical trials [1,2]. So far, there are no regulatory agency approved drugs for humans that are based on plasmids, although four veterinary vaccines have been approved for use in animals [3]. The primary difficulties of using plasmids are: delivery into cells; subcellular trafficking (including nuclear access); and obtaining adequate expression over time, especially in dividing cells where the episomal non-replicative plasmid is diluted at least two-fold in each cell division cycle. In addition, it would be desirable to have robust plasmid manufacturing at a commercial scale.

Delivery into cells can now be obtained by a number of methods, including chemical transfection reagents, electroporation, sonoporation, nanoparticles, hydrodynamic delivery, microneedles, naked DNA, nucleofection, gene gun, jet injection and so on [4–6].

In order for transcription of foreign genes to occur, the plasmid must gain access not only to the cytoplasm (by direct entry or by endocytosis), but also to the nucleus, usually through nuclear membrane disruption during mitosis, or alternatively, by trafficking through nuclear pore complexes (NPCs) into quiescent cells (Figure 1 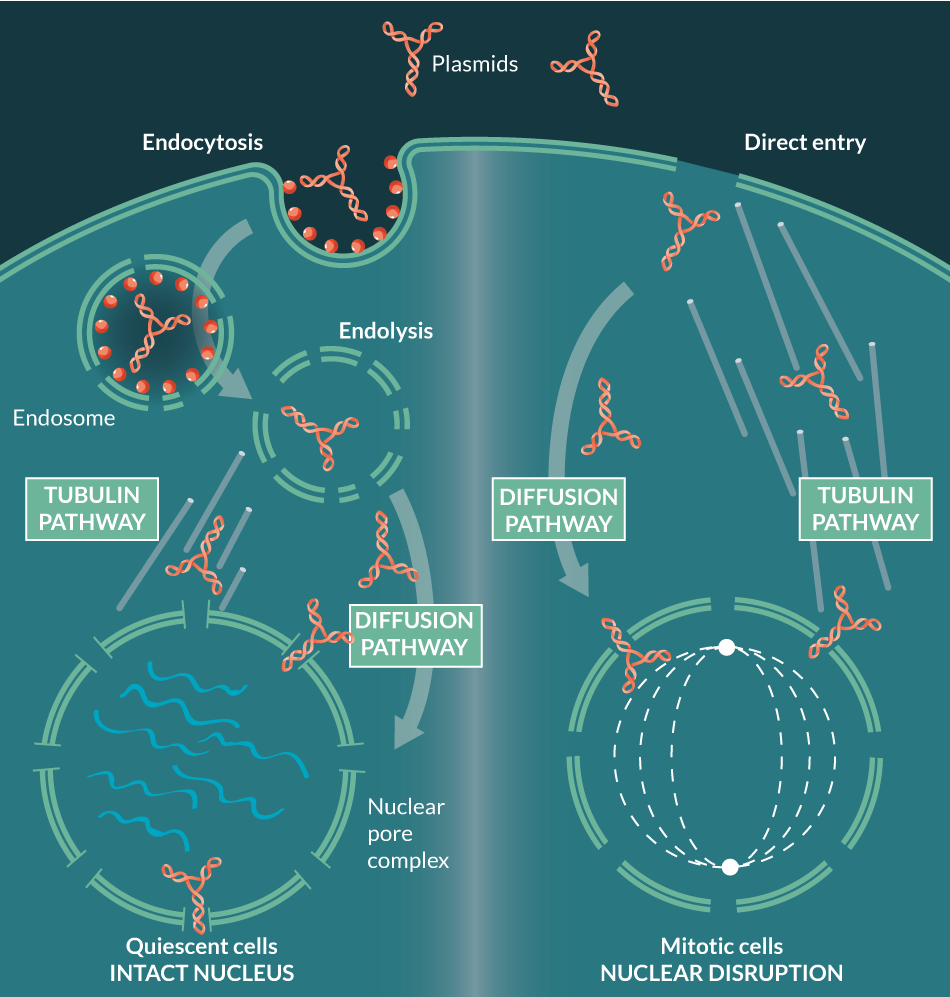 Cellular and nuclear trafficking of plasmids. Plasmids transit into cells by endocytosis (top left) or by direct entry into the cytoplasm (top right). After direct entry into cytoplasm, or after endosome escape, DNA can be trafficked by the tubulin pathway, or by diffusion to the intact nucleus (left) or to the partially disrupted mitotic nucleus (right). Plasmids entering intact nucleus of quiescent cells via nuclear pore complexes/imp7 mediated RanGTP hydrolysis (bottom left). Plasmids entering into the mitotic complex during nuclear dissolution (Bottom right).). The latter process is dependent upon the importin β superfamily of nuclear import proteins [7], most notably, by Importin 7 (imp7), which binds and hydrolyzes RanGTP as an energy source for nuclear import [8]. Histones and other DNA binding proteins are bound to DNA in the cytoplasm and act as intermediaries for the import of transfected DNA into the intact nucleus.

In order to attain improved expression over time, it is important to have highly optimized transgenes and to have bacterial vector sequences that are compatible (preferably synergistic) with expression in eukaryotic cells. In addition, it has recently been shown that plasmid gene silencing is primarily caused by having approximately >1kb of bacterial DNA in the vector backbone [9]. First-generation DNA plasmids have large >2 kb bacterial backbones comprised of the pUC replication origin, an antibiotic resistance marker and extraneous bacterial DNA sequences (Figure 2 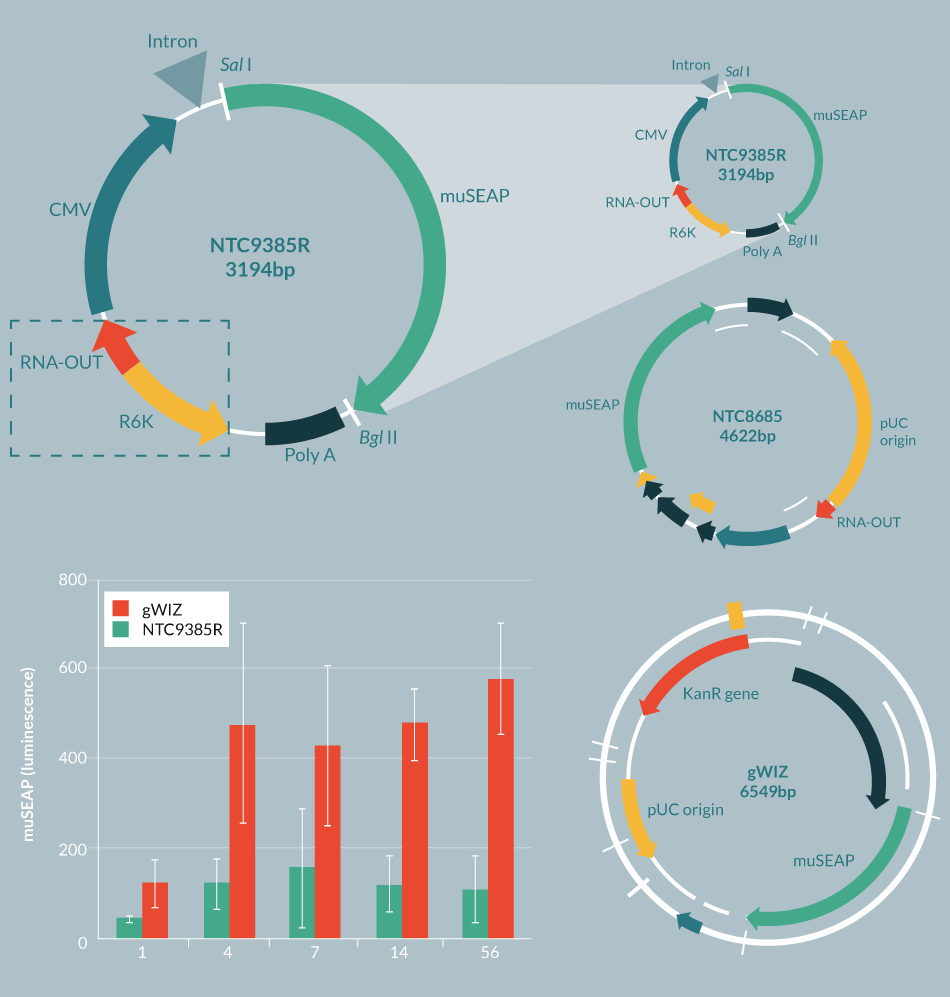 Comparison of Nanoplasmid™ NTC9385R-muSEAP (3194bp; <0.5 kb bacterial backbone) to plasmids gWIZ-muSEAP (6549bp; 2.7 kb bacterial backbone) and NTC8685-muSEAP (4622bp; 1.7 kb bacterial backbone).Dashed line denotes NTC9385R bacterial region (454bp; top left). Right, size comparison of three plasmids. In the Nanoplasmid™ vector, the 1527 bp muSEAP transgene comprises approximately 50% of the entire vector mass. Improved expression is obtained with NTC9385R-muSEAP compared to gWIZ-muSEAP after intramuscular delivery with electroporation to mice (bottom left). Expression of NTC8685-muSEAP was also improved compared to gWIZ-muSEAP. Nanoplasmid™ expression improvement is not simply due to reduced overall vector size; pVAX1-muSEAP (4617 bp, 2.0 kb bacterial backbone) expression is >1 log lower than similarly sized NTC8685-muSEAP [Data not shown].). Ideally, it would be desirable to have as little bacterial DNA in the vector as possible. Having a minute bacterial footprint would also avoid the additional processing steps of removing the bacterial sequences, as with minicircle vectors [10]. Finally, it would sometimes be desirable to have plasmids that replicate episomally during mitosis, permitting long-term persistence and expression without use of a viral replicon, or by causing insertional mutagenesis of the host human genome. This would be useful, for example, for altering engineered stem cells in culture or for engineering CAR T-cells without using viral vectors or transposons.

The failure of first-generation DNA plasmids to perform adequately in many early clinical trials has led investigators to design and make vectors with improved efficacy, safety and industrial production [11]. Nature Technology Corporation (NTC) has spent the past 15 years developing innovations aimed at solving technical issues related to the use of DNA plasmids. The initial goals were to remove all non-essential sequences from the plasmid backbone (including extraneous bacterial DNA flanking the selection marker and replication origin, Z DNA, cruciform, palindromes, repeats, cryptic splice sites, RNA secondary structures, human genome homology, alternative reading frames, cryptic promoters or chi sites) and to provide a useful variety of subcellular targeting tags and transcriptional promoters. This resulted in the pDNAVACC™ family of vectors, intended for use as DNA vaccines and for gene therapy [12].

Next, antibiotic resistance genes were replaced with a small RNA selectable marker (RNA-OUT) [13], which allows selection with sucrose rather than antibiotics, and which has the serendipitous effect of dramatically improving gene expression from the eukaryotic side of the vector [14,15]. This resulted in the 1.7 kb bacterial backbone RNA-OUT pUC origin selection-replication origin NTC ‘8’ series of vectors (Figure 2) [14,16]. These vectors are currently in a number of Phase 1 and 2 clinical trials with no serious adverse events, have shown positive efficacy ex vivo and in vivo [17–19], and have been licensed by biopharmaceutical/drug development companies.

Next, plasmids with R6K or ColE2 miniature origins of replication (mini-ori) were devised, which use engineered E. coli host strains that allow conditional replication of plasmids only in the engineered strains (also helpful to prevent propagation of the plasmids in the environment, which has been found to be a problem with traditional pUC-derived plasmids [20]). These new mini-vectors, called Nanoplasmids™ [21,22] are among the smallest plasmid bacterial replication and selection backbones (<0.5 kb, including mini-ori and RNA-OUT). They have expression levels higher than the NTC 8 series vectors, are resistant to gene silencing and do not require further processing/recombination in order to maintain high levels of expression (Figure 2). The 1.7 kb NTC ‘8’ series RNA-OUT, pUC origin cassette was also used by the Kay Lab at Stanford University to create mini-intronic plasmid (MIP) vectors [15], which resemble Nanoplasmids™, but contain the RNA-OUT, pUC origin cassette within an intron, rather than within the spacer region (located between the poly(A) site and the enhancer of the eukaryotic transcription unit sequences). MIP vectors, like Nanoplasmid™ vectors, increase transgene expression up to ten-fold compared with plasmid or minicircle vectors and alleviate transgene silencing [15]. The RNA-OUT mini-ori cassettes when substituted for the RNA-OUT pUC selection-replication cassettes in MIP vectors show similarly improved vector performance [21]. NTC’s Nanoplasmids™ have been tested thoroughly by many companies and labs throughout the world, but have not advanced to human trials yet. Nevertheless, each of the elements of Nanoplasmids™ (RNA-OUT, R6K) have separately been tested in the clinic without problems.

Finally, for industrial/commercial production of plasmids, NTC has developed a plasmid cell banking and fermentation process (HyperGRO™) [28–31] that results in dramatically improved yields (1–3.5 g/L) of plasmid and Nanoplasmid™ DNA, compared to traditional methods (typically 100–500 mg/L). The fermentation involves a batch growth phase in semi-defined media, followed by nutrient limited exponential growth (µ = 0.12 h-1) at reduced temperature (30 °C), followed by a mid-exponential phase temperature shift (42 °C) to induce plasmid hyper-proliferation. The fermentation can be followed by downstream processing using traditional (alkaline lysis) methods, although NTC has devised an alternative downstream process that uses a temperature inducible autolytic host strain for release of the plasmids from the harvested fermentation cell paste [32,33]. The autolytic process reduces chemical usage in the lysis step by 95%, and costs by 90% – important factors in scaling up, and for reducing the environmental impact of future commercial plasmid manufacturing. It also avoids denaturation-renaturation, which can have unintended consequences on the final product.

Current non-viral vector R&D at NTC involves collaboration with colleagues at institutions that are developing gene therapeutic and immunological products using NTC vectors and technologies. In addition, we are collaborating with the Harbottle Lab at the German Cancer Research Center (Heidelberg, Germany) on the next phase of vector development, combining Nanoplasmids™ and episomally replicating S/MAR vectors [34,35] for improved non-integrative episomal replication vectors.

The authors are each equity owners of Nature Technology Corporation. No writing assistance was utilized in the production of this manuscript.

This work is licensed under a Creative Commons Attribution- NonCommercial – NoDerivatives 4.0 International License.

This article is part of the Next Generation Vectors spotlight

Plasmids transit into cells by endocytosis (top left) or by direct entry into the cytoplasm (top right). After direct entry into cytoplasm, or after endosome escape, DNA can be trafficked by the tubulin pathway, or by diffusion to the intact nucleus (left) or to the partially disrupted mitotic nucleus (right). Plasmids entering intact nucleus of quiescent cells via nuclear pore complexes/imp7 mediated RanGTP hydrolysis (bottom left). Plasmids entering into the mitotic complex during nuclear dissolution (Bottom right).